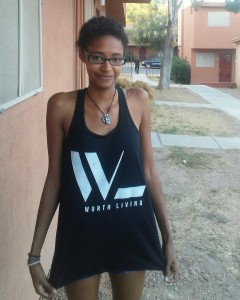 “Hi, my name is Jaymi.  I am 22 years old and live in North Las Vegas. I love karaoke but according to my Dad, I could kill birds with a voice like mine (it takes talent to sing this badly ). I love being outside and I am currently learning to get out of my comfort zone. Did I mention I am a dork?!”

Raising awareness for mental health is so extremely important and that is why I am writing this today.
I can’t speak on behalf of many mental illnesses, but I can openly tell you my story and the struggles I still face today with memory loss.
In February 2015, I had noticed a change in myself.  I had become a little more forgetful throughout the day than usual. I didn’t speak up about it at first because I figured everyone becomes a little forgetful sometimes (I was wrong).
A week or two later a friend comes by to take me to work.  During the car ride we are talking, laughing, but suddenly I  questioned  my surroundings and where I’m going. So I stop her mid-sentence and ask her “Where are we going?” she replies “I’m taking you to work and sometimes we take the freeway”.  She asked me “Why?”    I look at the day, date, and time on my phone which would make sense for me to be going to work on that specific day at that time. I look at my clothes and noticed that I’m wearing my work uniform and instantly tell her nothing. As I looked out the car window for those few moments,  I was confused and everything looked new to me (which is extremely unusual because I was born and  raised here).
I lived with my dad at the time so once I got home from work I told him about the incident that happened earlier that day. We agreed to bring it up at my upcoming neurologist appointment. A few weeks passed and my appointment day was finally here. I was beyond nervous and I had every right to be. When the doctor called my name,  my dad and I  stood up and we both walked back to the  examination room.  The doctor asked me how I was doing and I said I’d been better.  I told him that I’d become more forgetful than usual lately. He got a smirk on his face and did this half laugh half chuckle. He told me it was a side effect from my medication. He said in the old days it was called dopey lopey because people were always forgetting things while they were on this medication. My heart immediately sank to my butt (that is just a metaphor I use when I’m being dramatic) and my mind was going 100 miles an hour. I told him I wanted to be taken off this medication because it causes memory loss. He explained to me and my dad that I couldn’t just be taken off the medication, that with time I would slowly stop taking one pill at a time.
I was in tears the whole car ride home.  Once there, I had the pill bottle in my hand ready to flush the whole pill bottle down the toilet. My dad saw me and said that we should follow the doctor’s steps and in a while I would no longer be on that medication. My dad was right, in time I was taken off that specific medication completely and I was doing good….for a while.
One morning I woke up to get ready for work. I picked up an earlier shift than usual so I was like a walking zombie HA! Anyway I went into the bathroom, when I got up I just fell on my knees. No one heard it so I said to myself brush it off, I started to brush my teeth and out of nowhere my chin hits the counter top really hard. I lost control of my body and I couldn’t even tell you how. My dad knocks on the bathroom door to ask what that was and if I’m okay. I tell him it was nothing and I’m fine, I finish brushing my teeth but I fall again and at this point my chin and knees hurt. I sit down to put on my uniform, and do my hair but the challenge is I have to walk down stairs to get to the car. Dad asks me if I’m sure I’m okay, I say yes. I remember taking a few steps past the bottom of the stairs and  I fell face first into the concrete. My dad helped me up.  I can’t remember too much after that other than waking up in an ambulance and a man telling me I had two seizures. I go back to my doctor and I end up back on the prescription that causes memory loss. I cried for days and to this very day I am still on that very medication.
Although my memory gets worse with time , I get great pep talks from my Dad & cousin Daysia. I keep FAITH, HOPE, & MEMORY JOURNALS (two Memory Journals so far). There is so much more to my story but I’ve already written enough so I’ll end it on a happy note