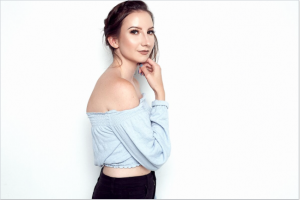 My name is Katherine Anne McCain, and I was born with one arm. I am a freelance model and a
student getting my degree in Psychology. When I was 16 I started my ongoing battle with
Anorexia and my constant battle with poor self-destructive tendencies. When I was about 19
(I’m 21 now),  I made the decision to go into therapy and to begin my journey of finding health
and to loving myself again. Throughout my recovery I’ve learned a lot more about myself and
my passions, and have found a deep love for helping others and spending time with my friends,
family, and sorority sisters.

Lately, I’ve had trouble finding inspiration to write. I believe that it’s partially because in my last
few weeks of school, I have been really happy for no reason in particular and I have been busy
completing my degree. Right now what inspired me to write is a story I think it’s important to
share. My story starts with my Saturday night.

For most of November I have been sick and haven’t left the house much besides going to class, so when I found out that my sorority got invited to a very exclusive party for a social elite 18-year-old I knew I wanted to go. Still  somewhat sick, I took allergy meds and Advil and got ready to go.

The party was the most unreal thing I’ve ever been to. When my sisters and I were waiting to check in with our names that were  on the list, we entered a parking lot with multiple Ferrari’s, Mercedes, really any new beautiful  car you could dream of. The party had a red carpet, photo ops, dancers, endless hors d’oeuvres, and three music performances. It was like being in Vegas but better. It was easily the party of the century, which was no surprise because the family got a lot of attention the previous year for  having thrown the daughter a $6 Million quincenera. I had the best night of my life honestly. I got to see some of my favorite artists, enjoy the open bar, and see some of my favorite celebrities who made an appearance.

During the second artist’s performance, Diplo, I saw a guy that I thought was really cute stand by me in the front row. I think I laughed at him because I had one  of those really cool light up foam glow stick things and his wasn’t working and he took that as  me flirting with him- which I probably was- but either way he was really cool and we started  dancing together. After Diplo’s set we kept talking and we hit it off really well, it was very unexpected. I think it’s because neither of us were from the state we are currently in so we  bonded over that and that both of us were the very few that aren’t the celebrity, social elite type. We were having so much fun that he asked me to leave with him, so I did.

We actually hung out outside the venue for a while just talking and laughing. It was funny, when he wanted to find his car he wanted to Uber to it and he went around asking Uber’s if they could drive us to it as if it  was a taxi. He ended up paying an Uber driver after all, so sorry to whomever didn’t get their Uber they ordered that night. He is a really great guy and we had a great night. This story is not going
in the direction of him doing anything wrong, I actually really like him.

The thing that was wrong about the night was his co-workers. He came to the party with several
of them. I didn’t see them or say hi to them or anything because all night it was just me and him
dancing and talking. I wouldn’t have known he came with them if he hadn’t told me. Late that
night he, out of the blue, asked me if I was born with my arm like this to which I answered yes.
He then proceeded to tell me that at 3am, when he asked me to leave with him, ALL of his
co-workers told him not to leave with me because “she has one arm.” He seemed genuinely mad
that his coworkers would say that so it didn’t bother me. I had an amazing night, probably the
best one I’ve ever had. At this point, as you all know, I’ve been called names and have been
bullied all my life and it felt good that I didn’t let him telling me that get to me. I love who I am
and if they don’t, that sucks. I met a nice guy and partied with famous people. I think I looked
great.

Now, reflecting on that night, the comment still doesn’t hurt me which I’m proud to share
but it poses a lot of questions for me. Why did he tell me this information when we had already
left? I like to think it’s because he was genuinely shocked and angry which is what he expressed
but I can’t know what his intent was with telling me this. I also want to know what was said. I
noticed he texted in the car, is that when they told him not to leave with me? I was with him and
only him and my sisters all night, who was watching me and why do they think that’s okay?

It surprises me every time that it’s 2017, almost 2018, and people still care about my arm. Like yes,
we’re at a social elites party, he could bring any other girl home that he wanted to but I am not of
less value because I’m missing a limb. He and I had briefly talked about how important it is to
talk about differences, etc. to avoid situations like this.

I share all of this to bring hope to anyone out there getting bullied, because I am proof that one
day the comments don’t matter. They don’t affect you. Had the guy I was with told my nineteen
year old self this, I’m sure she would’ve been hurt and would’ve deeply internalized that pain,
and turned to excessive drug and alcohol use.

I don’t know what changed with me, I suppose it’s meeting enough nice people and finding my support system but I don’t really let others comments affect me. When I go out I know they are inevitable, but they don’t change who I am or what I’m worth.