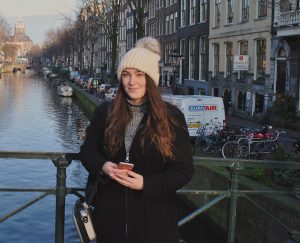 My name is Lorna Morrison and I am a 22 year old Film and Television graduate. I blog about mental health and my recovery from an eating disorder in the hopes that I can aid others to seek the help they deserve.

I know that saying your mental health disorder is a voice in your head sounds like some stereotypical rubbish that you don’t want to hear. Believe me that’s what I thought when it was first explained to me.. However, once I started to look at it in this way it helped me so much.

Living with an eating disorder you have a voice nagging you from the moment you wake up to the time you fall asleep. It won’t let you forget it. It has an opinion on most things you chose to do and a lot of the time it takes these choices from you. Whilst you’re suffering, the eating disorder voice is the loudest one and you just succumb to its desires. The difference once you start going through recovery from an eating disorder is that it can feel like you have two constant voices in your head battling with each other. One the “eating disorder voice.” telling you “you’re this, you’re that, you need to do this.” and then your own voice that is trying to fight it off telling yourself you’ve come too far to go back now.
I’m not going to lie to you, I’ve been in recovery for 2 years now and I still get days when I suffer badly from this voice but honestly that voice gets so much easier to dull the further in your recovery process you get. It becomes so much easier to tell your own thoughts from the disorder and to be able to push that cruel voice away knowing what it is telling you is untrue and unhealthy. For me now, I’m aware of the voice, when it starts trying to get inside my head again I can tell straightaway it’s my eating disorder talking and not me and because of this I’m now a lot stronger to not fall into the behaviours it tries to tell me to do.

Quit putting yourself in the bracket of your eating disorder it isn’t what makes you. I felt so attached to my eating disorder that sometimes it just became who I would define myself as in my head and that’s so unhealthy.
In my group therapy, we were given a work sheet to write two letters to a friend on how we would imagine our lives in five years time. One had to be our lives still living with the disorder and the second had to be what our lives would be without the disorder. This was so that we would detach ourselves from the eating disorder and make us look to a future without it and see how much better life would be. This was an activity that really opened my eyes to what I could have if only I removed that voice.

If you are suffering yourself try this activity and read the letters back and see how different they both are. Hopefully it will help you chose what you deserve. Recovery!
Please follow my personal blog at www.bitingback1995.blogspot.co.uk/?m