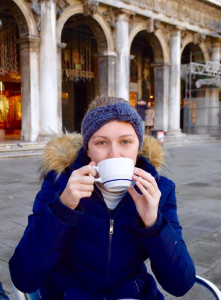 Hello. My name is Cat, and I am a 20-year-old diagnosed with bipolar disorder. Reading and writing became my solace during the darkest times in my life: the times when my journal seemed to be my only friend, the times when my jaw forgot how to make sounds, and my mind failed to form relationships with others. I decided to post my journals on a personal blog, both as a way of releasing my emotions and as a way to continue the mental illness conversation. Through writing out my experiences, I hope to provide hope—even the teeniest tiniest amount, even to only one person—because one cannot survive without hope. Hope is the genesis of recovery. Hope inspires hope. Thank you.

I was proud of who I was. I was educated, hardworking, giving, independent, attractive enough, upper middle class, funny, popular: all of the things I wanted to be. And then I went crazy.

Well, publicly crazy. I’d been privately crazy since I was 13 years old. No one knew. Some people still don’t really know. They still think that my mania is my normal. I used to think my mania was my normal, too. I suffered through my depressions alone, not wanting to be different, not wanting to show weakness. Depression was never my normal.

But hiding became more difficult in college. As classes demanded more and social events lingered around every corner, I devolved. When manic, school didn’t matter. Grades didn’t matter. Friends mattered. Parties mattered. Drinking mattered. Drugs mattered. And when depressed, nothing mattered. I wasn’t good enough for my school. I couldn’t concentrate. I felt slow, stupid, for the first time. I would never reach my dream of becoming a doctor. I would never have anything I wanted. In fact, my (ex) boyfriend broke up with me for this depression. My “stress stressed [him] out too much.” And that was the trigger, the end. That pulled me from a dangerously low depression into a frantic  and more dangerously, high mania.

My roommates found me going crazy. They—like the beautiful, amazing, beyond caring people they are—called my school’s emergency services on me. They ignored my screaming, my desperation, my voice repeating over and over again, “I swear I’m okay; I’m sorry; I didn’t mean it.” I put myself together long enough to tell the on-call therapist that there was no problem. She didn’t believe me, but she also didn’t pressure me to reveal myself. So I didn’t reveal myself. I hung up.

But I called back.

I began the journey of no return. And I quickly realized that I am not alone. My journey is a journey known well. A journey of ups and downs, backs and forths, twists and turns. But it is my journey, our journey, nonetheless. The most humbling journey I’ve ever experienced. Today I want to share this journey with you, broken down into 8 steps, 8 hurdles, 8 realizations. So here we go:

1. Admitting that you have a problem

I will never be enough.

I will have to carry my pill case to every sleepover. I will hide out in the bathroom to take them, all of them, so no one will know. I will carry my anxiety medications in my backpack, because I will never know when my next panic attack will hit. When I will not be able to breathe. When my heart will beat out of my chest. When my blood pressure will skyrocket. When I will feel like I am dying. When I will want to die.

People crave the brain I’ve come to resent. Some do cocaine to lift them up, up until they experience my mania, the mania I often still crave, too. Alcohol can raise them up in the same way. But as a depressant, it always brings them back down. The downs are worth the ups for some. Not for me. The downs are too down for me. More down than their downs are. I’ll be forced to stick to my drugs, my tranquilizers, my antidepressants, my mood stabilizers, my antipsychotics. I will be told repeatedly that I’m really not supposed to drink alcohol or do drugs. But that’s not fair. Everyone else can do it. Sometimes I will not strong enough, or I won’t care enough, and I’ll do it with them.

Q: How many medications does it take to (attempt to) fix me?

I was interviewed to enter a crisis unit facility, which provided the same psychiatric care as an institution, but with much more mental stimulation. My therapist loved this place. It was set up like a home and had 13 patients at a time. I had group therapy every hour from 8:00 am to 5:00 pm, with only one break for lunch. My dad came to see me for two measly visitation hours each day. I spoke a lot but said nothing. I would later learn that I was bad manic upon acceptance, and then good manic for my week locked up. I really thought I was better. Everyone really thought I was better. My manic was still considered my normal. Eighteen friends came to my visitation hours my last day there. More visitors than any other patient ever! I was thrilled. My life was getting better every day. Soon I’d be perfectly healed.

Forty-one days later, I was interviewed again, but this time I entered a real life psychiatric institution. I hated myself for being so incompetent, so out of control of myself. I was terrified. There were criminals, people who plead mentally ill for petty crimes and came there instead of jail. People were shouting and cussing and threatening each other. I got asked out on a date by a gang member my second night. I watched someone make a shank out of the end of a plastic spoon. One dude had a black eye from a street fight.

There was no mental stimulation. We sat in the day room for 12 hours a day, staring at the TV and the wall and each other, and that was it. The only fresh air we got was during smoke breaks. I guess you can’t really consider that fresh air either.

Believe it or not, entering this second institution became the best thing that ever happened to me. Because that was where I met my fifth psychiatrist. My current psychiatrist. The doctor who saved my life.and also changed my life, with three words: “you are bipolar.”

5. Becoming a test rat (aka: The second and third diagnoses)

Three months before my fifth psychiatrist saved my life, when I was still at school, I asked my therapist and psychiatrist if I was bipolar. I wrote out why I thought I was bipolar. I basically had a thesis ready for them. They dismissed it. My therapist was the head of the Bipolar Support Group at my school, so he knew how bipolar students thought and acted and they thought and acted differently from me. Obviously. My psychiatrist told me that I “shouldn’t worry” and that I “should be thankful that [I’m] not bipolar, because being bipolar is much more difficult than being depressed and anxious.”

My fifth psychiatrist disagreed. Obviously. I had been thrown around from professional to professional, and everyone had a different opinion, and everyone had a different solution. I tried concoction after concoction of the drugs I mentioned above. My brain felt poked, prodded, removed, observed, and placed back inside of me, a little different, a little changed, every time. I was diagnosed as bipolar 2. Then bipolar 1. But the specifics hardly matter. The treatment matters.

I finally placed my complete self into the hands of my fifth  psychiatrist. I didn’t trust anyone except for him at first. I wanted to rely on as few people as possible. When you have bipolar disorder, though, as few people as possible is still a lot of people. I next placed my complete self into the hands of my twelfth  therapist. But professionals weren’t enough. They told me the stronger social support I had, the better off I’d be. So I started with my family, who is required to love me no matter what, right? They accepted me. They loved me no matter what. But professionals and family weren’t enough. I knew I’d have to go back to school one day. My professionals and my family wouldn’t be right beside me anymore. So one by one, I told my friends. I started with friends whom I knew had also gone through mental health struggles. I figured they’d understand; they’d help. I expanded to my closest friends, the ones I trusted, the ones who were also required to love me no matter what, right? And then to some of my sorority sisters, whom I’d be living with next semester, if I went back to school. I tried my best to explain my circumstances.

“I am manic when I start talking too fast, or go on impulsive shopping sprees, or drink until I blackout, or yell at people without a good reason to, or have superhuman self-confidence, or get a red rash on my face, or chest, or arms, or stop eating, or stop sleeping, or exercise until I cannot stand any longer.”

“I am depressed when I am silent, or stop socializing, or cannot concentrate, or don’t leave my room, or don’t shower, or stay in the same clothes for days, or overeat, or oversleep, or do not move, not even to go to class.”

What am I like when I’m normal? “I don’t know yet”

My normal is bipolar.

Bipolar is my normal.

8. Sharing the rollercoaster that is your life

People tell me how amazed they are that I can write about my journey so openly. It has taken me eight months of constant pressuring from my therapists and psychologists for me to write anything at all. I “came out” on Instagram as bipolar a month and a half ago. I was terrified to share a piece of my life, right now the most important piece of my life, with so many people, almost all of whom I know. Right after I posted, I threw my phone across the room. I did not pick it up for hours. I was scared no one would understand. I was scared no one would care.

Thirty-six  days after my Instagram post, I felt prepared to take the next step. I created a blog to share more of my journey. There is still so much I feel I will never be able to share, but I used to feel that way about what I have already shared, too. And look where we are. The rollercoaster keeps on rolling, up and down and up and down, but I keep rolling with it. And my supporters roll with me. And I roll with those whom I support back. And the tracks go forward. And we go forward. Up and down and up and down.I am proud of who I am. I am still educated, hardworking, giving, independent, attractive enough, upper middle class, funny, popular: all of the things I want to be. And sometimes I go crazy. Who knows, maybe I want to be crazy, too. I now realize that no matter how much I want anything in this world, I realistically have no control over anything. The only thing I have control over is my reaction to the anything that is handed to me. The ups and downs and ups and downs. I will try my best to accept, and hopefully one day share, it all.

One reply on “Mental Illness and Humility”