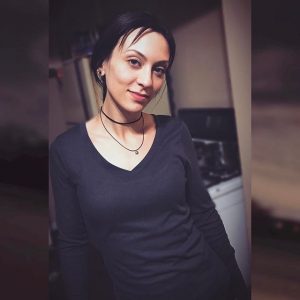 My name is Taylor, I’m 23 years old and a mother, living with Schizoaffective Disorder. If you don’t know what that is, it means I have extreme hallucinations and delusions caused by Schizophrenia and a mood disorder with uncontrollable episodes of mania and depression caused by Rapid Cycling Bipolar Disorder.

It’s Never Too Late for Recovery

I’ve been Schizoaffective since I was younger than five years old but I wasn’t diagnosed until I was 22. I’ve been living with the disorder untreated for over 17 years. Therefore, it has progressed immensely over time. I’m constantly hallucinating and always on the borderline of being present with reality and being stuck on multiple planes of existence that, apparently, only exist in my mind. I often feel like I’m losing my mind. The older I get the darker the illness becomes, even now that I’m on medication and attending therapy weekly.

Schizoaffective Disorder is a daily struggle for me and I know it is for many others as well, which is why I choose to advocate for people with mental illnesses and be open about mine and how it affects my life daily. I stand along with many others who strive to end the stigma against mental illness. I hope that I can help others living with this disorder to know that they’re not alone and that anyone reading this can identify these symptoms in themselves or a loved one so they can seek out the psychiatric help they need before the disorder progresses.

I always wonder what my life could have been like if I got the psychiatric help I needed as a child. Would I have graduated from college on time? Would I have a successful career? I never got the help I needed early on because everyone around me believed and supported my delusions.

When I was a child, I told my family and friends that I thought I could see and hear dead people. I would hear voices whispering to me, I would see shadow figures, faces looking through the windows, people chasing me, objects in the house move by themselves, doors and cabinets would open and close violently. I used to think I was haunted. I was a medium and spirits from the other side would come to me because they knew I could see and hear them. I would also tell people that I’m psychic and that I could see the past, present, and future. I could think of a person and look into their lives as if I was seeing it from their very eyes. Most people believed me, others thought I had a vivid imagination. My family thought I really was a psychic medium, so they told me to never tell doctors about my experiences because they’ll put me on medication that would ruin my mind and my organs. This was why I went so many years without treatment.

I even experienced episodes of paranoia, mania, and depression as a child. At times I would become extremely fearful of my hallucinations; it wasn’t the type of fear that most children feel, I was literally in fear for my life. I used to think ghosts or aliens were out to get me. I would cover all of the mirrors and TV’s with blankets so I couldn’t see the monsters. At some periods of time, I barely slept at night. I’d stay awake doing puzzles, building websites, drawing or watching music videos on MTV. For weeks at a time, I would stay awake the whole night then get ready for school in the morning only to fall asleep at my desk in class where I felt safe. I was productive with my school work and sociable with friends. Other times, I stopped doing my school work completely and became very withdrawn and unresponsive to other people. After school I would go to my room and isolate myself from the rest of the world, often sleeping for extended periods of time.

I had this delusion that I was “special” until I was 22 years old. I didn’t believe I had a chemical imbalance in my brain causing me to hallucinate all of these years. Things began to change after I started college and lived on my own.

I was once a very productive, smart, hardworking girl. I graduated high school a year early and as Valedictorian. At one point I went to college while working three part-time jobs. My ultimate goal was to attend the University of Michigan and be the first person in my entire family to graduate from college. I wanted to be an entrepreneur and start up several businesses, boosting the economy and creating jobs for people, as well as continue my education and later go into medical researching as a career. However, when my illness began to peak all of my hopes and aspirations came crashing down all around me, causing me to slip deep into a depressive state that lasted for years. Devastatingly to me, during my Junior year of college at an Ivy League school, I lost my scholarship due to what I now realize were psychotic breaks. My heart is still broken as I write this from my unattained goals. Graduation time is especially hard for me to handle, as I watch my friends go on to graduate school without me.

Even after being forced to quit school, I still had no idea I was living with Schizoaffective Disorder. I thought I had failed at life. I was very hard on myself, maybe, I still am.

During college, I was bouncing back and forth between manic and depressive episodes. I stopped putting on makeup, showering, and brushing my hair and teeth. I would spend days, weeks even, lying in bed lacking the motivation to go to class for no apparent reason. I thought I was too smart and that it was a waste of my time, that I was going to pass with straight A’s no matter what. I would go on shopping sprees, buying things like ten shampoo bottles at once thinking I was being smart and saving money. I would go days without sleeping or eating. This uncontrollable, erratic behavior is what caused me to fail out of college. I became very depressed thinking that my life was over and that I would never accomplish any of my goals.

Out of my depression, I began partying all day and night. Inviting strangers over to my house, drinking and popping any pill I could get my hands on to cover up what I was really feeling inside. This lasted about a month until I became pregnant. I ended all of that destructive behavior as soon as I found out I was about to be a mother. I had to get my life together.

While pregnant, I tried to go back to school at a community college. I was feeling extremely happy and strangely uplifted and euphoric. At one point during my pregnancy, I had the delusion that God was speaking to me telling me that the world needed my son to stop the Anti-Christ so I had to make sure I was the perfect mother. I completed one semester with a perfect 4.0 GPA; YES! I thought, I’m back and I can do this. Oh boy, was I wrong.

The first week after I had my son I started hallucinating again. I was giving him his first bath at home when I saw a shadow figure with red eyes and a top hat standing in the water. It scared me to death. I screamed and I immediately got my son right out of the bath. My family still thought I was seeing spirits; those evil entities were trying to attach themselves to our new baby. I didn’t give my son a bath for a few months after that, I would always ask family members to bathe him. I felt like I wasn’t a good mother, I couldn’t do a simple task like bathing my son because I was so fearful of my hallucinations.

I became pregnant a second time and decided to put school on hold again. After I had my second child, a girl this time, the whispers came back to me. They were telling me to do violent things to myself, my property, and other people. I was a single mother at this time and living alone, so I refused to believe that evil spirits had been following me all my life like my family led me to believe. This was when I started to realize that there was possibly something wrong with my brain chemistry. I still didn’t believe it was psychosis, I thought maybe it was post-partum depression causing me to have these intrusive thoughts.

Eventually, my symptoms subsided so I believed my “depression” was fading away. Now that I was starting to feel better again, school still wasn’t an option because I needed to support my two children on my own. I decided it was time for me to go back to work, but it didn’t go as smoothly as I had hoped.

I wasn’t able to hold a job for longer than a month. I was fired or forced to quit because I was suffering from hallucinations and delusions which caused severe distress and panic amongst my coworkers and customers. I believed that my boss and my coworkers were out to get me and playing tricks on me every day when in reality this wasn’t true at all. I often held management positions, and on several different accounts hundreds of dollars came up missing during my shifts. I thought someone was plotting against me and blaming me for stealing money. At one particular job as a waitress, I would have  hallucinations of  customers sitting down and wanting to order food. I was taking orders for non-existent people. When my coworkers noticed, they asked me what I was doing.

“There’s no one there, Taylor. Are you sure you’re okay?”

I became very embarrassed and angry. I started yelling at my coworkers in front of customers. When my coworkers gave me this reality check I would have meltdowns where I used to sob endlessly for hours. Obviously, these meltdowns and psychotic breaks hindered my job performance. I was a mess. I slipped back into depression after repeating that embarrassing cycle, job after job after job. I wondered- how am I going to support my family if I can’t keep a job?

I started to give in to the demands of the voices. Destroying my property, harming myself, but I was mentally strong enough to be able to refuse their demands to hurt anyone else. Eventually, I couldn’t handle the mental torture anymore. I became very suicidal and attempted to end my life on several different occasions. I felt like I was truly crazy, that I was a terrible mother and that my children would be better off without me. Thank God I didn’t succeed and I have the strength to share my story openly today.

One day I realized I was living in the wrong mindset and I finally decided to get help. Thanks to my medication and CBT (Cognitive Behavioral Therapy) I am working on changing harmful beliefs and behaviors and starting the recovery process. This illness has been extremely debilitating, still today I have dark moments and lose all hope to continue on with my life. But I have not given up. If you are feeling any type of darkness; DO NOT GIVE UP. It’s up to you to take the first steps towards recovery.

3 replies on “It’s Never Too Late for Recovery”