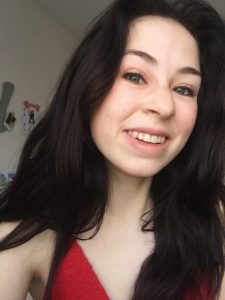 My name is Katie Campeau and I am going into my Masters at Acadia University. My studies have been devoted to mental health within Sociology. I have Obsessive Compulsive Disorder, depression, and I’m on the eating disorder spectrum.

A year ago today, I was being rushed to the hospital because of an OCD spiral that led to suicidal thoughts. A lot has happened in this last year, but I feel that it’s important to reflect on what happened back then because it was so pivotal in my recovery.

There was a lot of negativity in my life in 2017. My OCD started fixating on contamination-based intrusive thoughts, so most of my days were spent obsessing over whether I had some sort of virus. On top of this, I was deep into an eating disorder that I completely ignored. That whole past year, I restricted my caloric intake and started immersing myself in cardio. I thought that this behaviour was normal for girls my age and I wasn’t thinking properly through this haze of hunger and anger. At this time in my life, my therapy was strictly reserved to talk therapy—specifically Cognitive Behavioural Therapy (CBT).

I had trust issues with medication in relation to treating mental illnesses. My brother was mistakenly put on antipsychotics due to a misdiagnosis. So my experience with medications was based on watching someone I love lose themselves in a cocktail of ten different medications. My parents then became anti-pharma for obvious reasons. It never occurred to any of us that medication may be a viable option for me until July of 2017.

Last year, I did something incredibly stupid that triggered my OCD in a big way. I spent a couple of days with the thoughts, “You have a virus… you’re going to die, and it’s all your fault. You deserve to die.” Could you imagine having these thoughts on repeat every day? I spent that time sleeping all day and not eating. I stayed in my room and when my family and friends came up to see me, I pretty much ignored them. Eventually I went to my mom and I told her that I didn’t want to live anymore. It was too hard. I thought that after four years of treatment that I was better and yet I was still so sick. I couldn’t imagine falling into a new OCD spiral every couple of years. It wasn’t the life I wanted for myself.

After my mom learned about these thoughts, she woke me up one night and asked if I would go to the hospital. I said no. But it wasn’t a question. Mom started packing my things and I begged her to not make me go. I told her that I was scared that they’d never let me leave but my parents didn’t listen because they were too scared for me.

The hospital visit was a blur. I remember speaking to three psychiatrists who asked me about my mental health history. I had to tell my story over and over again. I told them about the childhood OCD history, the self-harming, and I told them I was afraid to eat sometimes. The first two psychiatrists were judgmental. They tried to pick apart my illnesses and questioned whether certain parts of my past were actually true. The third psychiatrist, on the other hand, focused more on my life beyond my illnesses. After I spoke with him about my ambitions, my hopes, and my dreams, he told my parents that he felt I didn’t belong in a hospital. He said that I was too driven and too accomplished. He said putting me in inpatient treatment would only hold me back.

He said that I should give medication a try. Specifically an anti-anxiety/antidepressant that also treats OCD symptoms. Being put on this medication was the beginning to my recovery.

I wasn’t admitted into the hospital, but since that hospital visit, I have been on that same medication (even increased the dosage) for the past year and it has made my life more than bearable. It has opened me up to so many positive experiences and it continues to help me disregard some of the darker intrusive thoughts. It’s made my future look so much brighter than I could have ever anticipated.

This isn’t a post dedicated to preaching about the miracles of medication. Medication has been beneficial for my mental health—but I understand that it’s not for everyone. This treatment is the reason that I’m still kicking around and pursing a Masters. In many ways, these two treatments have saved my life.

At the end of the day, I find it kind of ironic how a major setback in my life—a mental health crisis like no other—has improved my mental health so much. My OCD pushed me down so hard, and I was given the tools to bounce back, ready to fight. Ready to thrive.

What a difference a year can make.