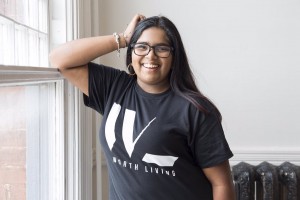 Delicia is a performing arts student who also takes on the world with her passion in spoken word, motivational speaking, song writing, the arts, musical theatre, and changing the world with strength and kindness. She has become who she is by volunteering, speaking and life changing travels. Delicia simply  states her journey so far: Canada Born. Kenya Bound. Arizona Built. Amazon Braving. Strength Embracing

Stigma isn’t Over: A Student Perspective.

Stigma isn’t over because I’ve heard countless comments on how I couldn’t possibly have a mental illness because of my academic standing. From “you don’t seem like it,” to “but you’re so smart,” the words burn into me like a lighter held near paper- slowly but surely. The pain of invalidation and lack of support.

I have high functioning disorders which make it easy for people to believe the facade. But it doesn’t make my illnesses any less real. I still suffer and struggle. I still hurt and sometimes tasks like putting my feet on the floor or turning on the bedroom lights are seemingly impossible. Just because one cannot see it, doesn’t mean it’s not there. Please stop invalidating my illness because like any other illness, it is just that. An illness. Stigma isn’t over.

Stigma isn’t over because I can’t comfortably tell my teacher the reason for my absence without fear of disappointment or judgement. For some reason “I was at the hospital for medication changes because of my mental illness,” or “I was taking care of my wellbeing,” doesn’t flow off the tongue as well as “I broke a bone,” or “I had the flu.” Yet all of these challenges are valid. I still cannot go to my teacher and ask for an extension on my assignment because of my mental well- being but my classmate on the hockey team is given an extension without any questions asked. I couldn’t be exempt from exams despite a hospital note for a mental health crisis but concussions were exempt without hesitation. Stigma isn’t over.

Stigma isn’t over because I had to fight and I still have to fight for accommodations because I don’t look like I have an illness even though I have a hospital doctor’s letter in my student file. I was told that I was too smart to receive accommodations despite my need for them. My intelligence has nothing to do with my illness, but my focus, anxiety, memorization, and work ability does. Stigma isn’t over.